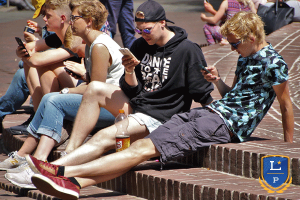 The image of people staring into the screen of a mobile device has become ubiquitous for our times.

But how do mobile phones affect our children?

You won’t be surprised to hear that researchers have started to delve into that question. And it probably won’t surprise you that a movement, Away for the Day,  has resulted from their research.

Here is a quick overview of the research. Does any of this surprise you?

56% of middle schools allow students to carry phones on them all day.

82% of parents of middle schoolers do not want their kids to use cell phones during school.

75% of teachers reported that the attention spans of students has decreased.

62% of college students not using their phones scored higher on multiple choice tests.

20% teens who spend more time in person with friends than those who don’t, are 20% more likely to report being happy.

AWAY FOR THE DAY

We collect cell phones during class time at LEADPrep because we find that when students are not able to freely access their phones during school hours they are more engaged socially and academically. Happy, focused learners is a positive result!

Learn more about the research at Away For The Day.